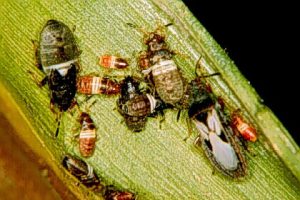 The early insect prevention is applied during the spring and early summer months. Early Insects include insects such as: Sod Webworms,  Bill Bugs and Chinch bugs

The hairy chinch bug is a common lawn pest that sucks sap from grass with its piercing mouthpiece. Chinch bug damage gives the appearance of small round dead patches (brownish-yellow grass) and opens up areas for weeds to become established. When not controlled, large sections of the lawn may die. This is particularly true of sunny, dry areas near slopes and edges of lawns. Chinch bugs also cause damage when they feed as they inject a toxic saliva into the grass causing it to wilt and die. Population size depends on the weather, with only small populations being produced under wet conditions. However, if the weather is hot and dry early in the season with minimal amounts of rainfall, a large population may occur.

**Coverage period is once applied to August

The Grub Prevention is applied during the Summer months.

White grubs eat organic matter including the roots of plants.  Damage from grubs is often mistaken for drought stress as the turf first appears an off color gray-green, then wilts rapidly in the hot sun.  Continued feeding will cause the lawn to feel spongy under foot and the turf can often be rolled back like a loose carpet.  Grub populations my not cause as much observable turf injury as predatory mammals such as skunks and raccoons digging in the turf searching for a meal.

**Coverage period is once applied to September 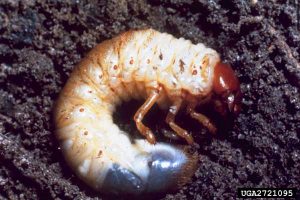 Because of the unpredictable nature of insect populations, the difficulty of diagnosis, and the frequency of insect damage to turf, it is highly recommended that both the Early Insect Preventative and Grub preventative be applied to your lawn.