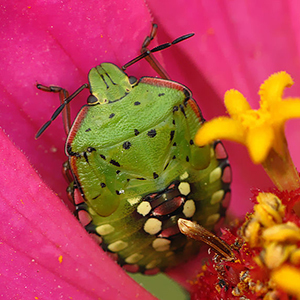 The chinch bug is a common lawn pest that sucks sap from grass plants with its piercing mouthpiece. Chinch bug damage gives the appearance of small round dead patches and opens up areas of damaged turf for weeds to become established. Large sections of turf may die when not controlled. Any area that is sunny, prone to being dry, on a hillside, or along the edges of driveways or sidewalks is especially vulnerable to chinch bug infestations. Shaded areas are at a much lower risk. When chinch bugs feed they inject a toxic saliva into the grass plant causing it to wilt and eventually die. Wetter cooler weather favors smaller populations while hot dry conditions favor lager populations.

Maintaining a healthy lawn generally enables turf to withstand mild infestations. Studies have shown that regular irrigation may produce spores which attack and kill chinch bugs reducing their populations. However, an application of insecticide may be warranted when more than 15 to 20 chinch bugs are found per square foot and signs of damage are occurring. 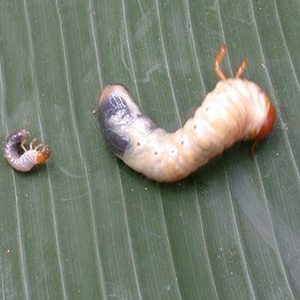 White grubs are c-shaped grub worms approximately 3/4” long that turn into various types of beetles . The most familiar is the Japanese Beetle. Grubs feed on the root system of grass plants. Damage first appears late summer or early fall as light brown patches throughout the lawn and is often overlooked as drought or heat stress. If it is a heavy infestation the turf will roll back like a carpet. Nocturnal mammals such as skunks and raccoons feed upon grubs and will tear up large sections of turf looking for them often causing more damage than the grubs themselves. In the spring you may find mature grubs in the lawn but it is rare that any damage will occur. 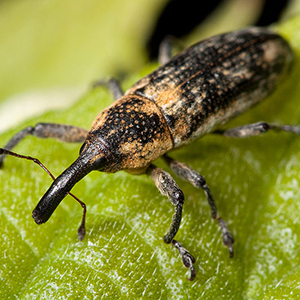 Adult billbugs are about 1/5” – 3/4” long. They are brownish black beetles with a characteristic long snout and mostly feed upon Kentucky Bluegrass. Adult beetles live near the surface of the soil and feed on the grass stems and leaves. Billbug larvae are small white c-shaped grubs resembling wet pieces of white rice and feed upon grass roots in the soil.

Damage occurs in both stages of the billbugs life: adult and larvae. Typical signs of adult billbug damage is irregular brown patches throughout the lawn resembling drought damage or dormant turf. A sure sign that brown areas were a result of adult billbug activity is to gently tug on the grass and if it separates easily from the crown/roots and if you find a sawdust like material at the base of grass plants/stems, billbugs were probably the cause. In the case of billbug larvae damage, turf will come up easily by the roots (roll back like a carpet) and you can easily see the small grub worms in the soil.

Irrigation or adequate rainfall is usually enough to allow injured turf to recover from low to moderate billbug activity. Insecticide applications may be necessary if populations are excessive and damage is occurring although control can be difficult . The adult threshold is 1 per square foot. 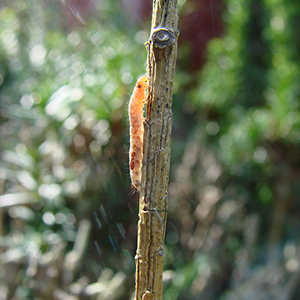 Sod webworms can reach sizes of 3/4-1 inch in length and live in the thatch layer of lawns. Kentucky Bluegrass is the most susceptible grass type. They feed at night on blades of grass and as they feed they produce easily observable silk lined tunnels in the thatch near the soil surface. Damage appears as small irregular patches of dead grass or bare spots and significant damage is possible if large populations are present. Sod webworms turn into a small slender lawn moth. When disturbed they are seen to fly short distances close to the ground. Adult moths do not feed upon lawn grasses. Insecticide applications may be needed if populations exceed 2 per square foot and damage is occurring. 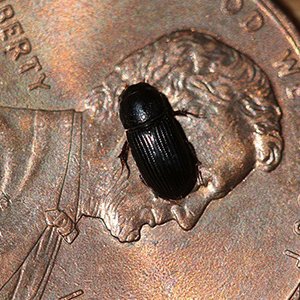 Black turfgrass antaenius grubs are the larvae stage of a small, shinny, jet black beetle that reaches a size of about 1/4” long. The adult beetle rarely causes turf damage.

The Black Turfgrass Ataenius grub is mainly a pest of bentgrass golf course greens and tees and may also affect highly maintained Kentucky Bluegrass residential lawns. They may be distinguished from other white grubs by their small size (about 1/4”), the pattern of scattered bristles on the last abdominal segment and a pair of pads on the tip of the abdomen.

Larvae damage the turf by feeding on the roots causing irregular dead patches throughout the lawn. At first damaged areas resemble drought stress and if significant feeding has occurred turf will roll back like a carpet. Nocturnal mammals such as raccoons and skunks will tear up large sections of the turf looking for them often causing more damage than the grubs themselves.

Insecticide applications may be necessary if populations exceed 40 grubs per square foot and damage is occurring. Proper irrigation and raising the mowing height may help turfgrass withstand low to moderate populations